When I was in my 20s, I was lucky enough to visit Fraser Island. For those of you that don’t know about Fraser, it’s a World Heritage area and is the earth’s largest sand island. Interestingly, its Indigenous names – K’gari or Gari – which means ‘beautiful place’ have recently been ‘made official’ by the Government.

During that late spring trip (in my 20s), I spent 3 days on a 4WD bus tour with 15 other travellers. It was a beautiful and busy adventure with dingo and brumby encounters, sizzling sand dune hikes and cooling fresh water swims. Lake Wabby was a curious highlight as there were little fish that nibbled on your skin.

This time around, we decided to hire our own 4WD and tour the island. It was a completely different experience. We used Hervey Bay as our base and organised to pick up the car on the island. Catching the earliest ferry over to Fraser was fascinating as many of the island’s workers were doing the crossing too.

The beauty of leaving so early in the morning and going to Fraser in the winter months is LESS PEOPLE. It was so quiet and peaceful – like the whole island was just waking up itself. We bounced up and down over hills and gullies as the sun rose higher than those towering eucalypts. 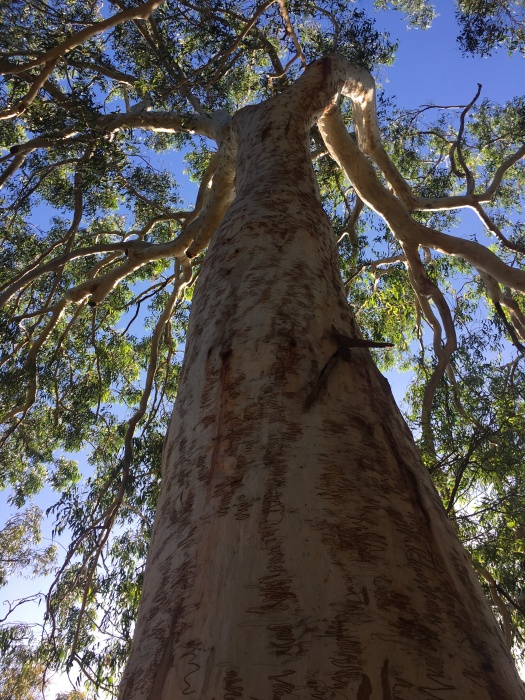 Fraser Island isn’t just beaches and lakes. There is a diverse array of flora that grows here. Above is the Eucalyptus haemastoma, known as the scribbly gum, it’s an Australian eucalyptus that looks like it has scribbles written all over it.

There’s a lot to explore on Fraser. Once we got to Seventy-mile beach – yes a beach highway – we drove as far as permitted, all the way to Champagne Springs. Just around the corner is Indian Head, where the views are breathtaking.

You can’t miss the Maheno Shipwreck – literally – it’s right on the (sand) highway.  The Maheno ocean liner is Fraser Island’s most photographed long term resident. What is left is a shell of its former engineering mastery, its opulence and its saving grace as a WWI hospital rescue ship.

Taj searched for ghosts that are said to haunt the Maheno, but he found none. He was caught up in the former majesty of the ship, and its history. It’s my second visit (after 17 years) and my feelings remain the same – who wouldn’t want to run aground and rest in this piece of paradise.

We gazed up the coloured sands of The Pinnacles and followed the crystal clear waters of Eli Creek which weaves its way down to the ocean. I didn’t brave the cold waters of Lake McKenzie this time around but instead watched the rippling waters that were a deeper blue than the sky above.

We had to pull over as a plane came in to land on the beach, saw very experienced drivers get bogged and marvelled at how a sand island can sustain such life. But it does and it’s extraordinary.

I still loved the trip in my 20s but this one was so special because it was just the 3 of us and we didn’t have to follow an itinerary. If you do one day find yourself stranded on a desert island, this ‘beautiful place’ is where you’d want to be.